Kariņš: the untapped trade potential between Latvia and India is sizeable; urges to open an embassy in Riga

While hosting the Vice President of India, Latvian Prime Minister reiterated Latvia's desire to enhance the political dialogue and urged India to open an embassy in Riga to also deepen the trade ties between both countries.

Prime Minister Kariņš stressed the need to intensify bilateral trade relations. He praised the willingness of business communities on both sides to strengthen the mutual cooperation and highlighted the advantages of creating partnerships in areas such as IT, pharmaceuticals, transport and logistics.

Meeting between the Latvian Prime Minister Krišjānis Kariņš and India's Vice President Muppavarapu Venkaiah Naidu concluded with the signing of Latvia-India Culture Cooperation Programme for 2019-2021. On behalf of Latvia, this document was signed by Dace Vilsone, State Secretary of Ministry of Culture. Her counterpart on the Indian side was A. Gitesh Sarma, Secretary (West) of the Ministry of External Affairs. 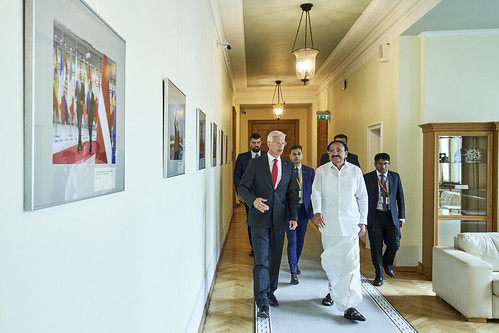 The website has been developed in conformity with the conditions of the Grant Agreement of the European Commission No. ECFIN-105-2013-SI2.651674 "Communication Activities Relating to the Euro Changeover in Latvia".
A reference to the State Chancellery of the Republic of Latvia is compulsory when the document is republished
Last updates in page 26.05.2020
© Valsts kanceleja, 2014