Prime Minister: The rights of the Latvian community living in the UK are relevant

On Wednesday 14 February, Prime Minister Māris Kučinskis met with John Bercow, Speaker of the House of Commons in Riga.

During the meeting, M. Kučinskis emphasized that it is important to maintain the close relationship between the UK and the European Union (EU), especially among politicians, after the withdrawal of the UK from the European Union (EU). The UK is an important partner of Latvia, and has been playing a significant role in the history of our country since its foundation.

"It is hoped that rational considerations and minds will win the UK's internal Brexit debate. It is a pity to lose the like-minded country in the EU, but we respect the decision," said the Prime Minister.

Latvia believes that a multilateral dialogue between the Baltic, Nordic countries and the United Kingdom is also valuable.

There are about 100,000 citizens of Latvia living in the UK. It is the largest community of compatriots living outside Latvia. This community makes an important contribution to both the UK and Latvian economies, intercultural contacts, and people-to-people contacts. The Prime Minister stressed that the rights of the people of the Latvian community living in the UK are important for Latvia.

As evidenced by stable sales volume, the United Kingdom is a significant trade partner of Latvia. Despite the Brexit process, according to the data of nine months of the last year, the turnover from trade in goods has increased by 21%. There are also significant UK investments in Latvia - successful co-operation between Latvian-British joint ventures; however, there is definitely potential for expanding cooperation in terms of attracting investment.

"In the light of advantages of the Latvian technology industry and the concept of a data-based nation developed by the government, we wish to particularly promote cooperation in the areas of smart specialization: bio-economy; biomedicine; smart technologies; intelligent energy and ICT," said M. Kučinskis. 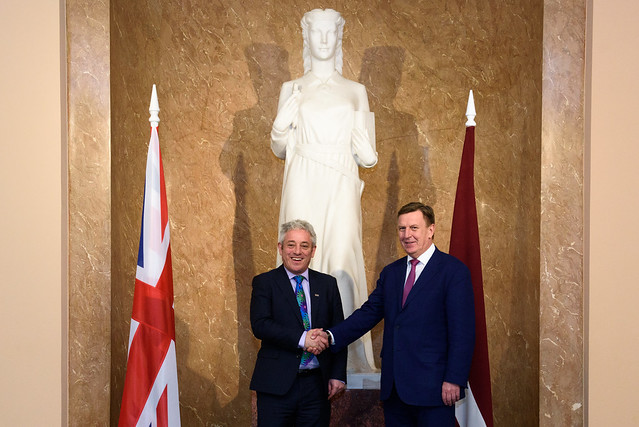 Press Secretary to the Prime Minister

The website has been developed in conformity with the conditions of the Grant Agreement of the European Commission No. ECFIN-105-2013-SI2.651674 "Communication Activities Relating to the Euro Changeover in Latvia".
A reference to the State Chancellery of the Republic of Latvia is compulsory when the document is republished
Last updates in page 26.02.2020
© Valsts kanceleja, 2014